A Health Policy Brief published in Health Affairs on December 13, 2012 referenced an analysis published last April in JAMA regarding waste in health care.  In this analysis, Don Berwick (one of my health care heroes) and Andrew Hackbarth (from RAND) estimated that waste in health care consumed between $476 billion and $992 billion of the $2.6 trillion annual health care expenditures in the US.  That’s 18-37% waste.  They divided this estimate into 5 categories of waste.  Their mid-point estimates are as follows: 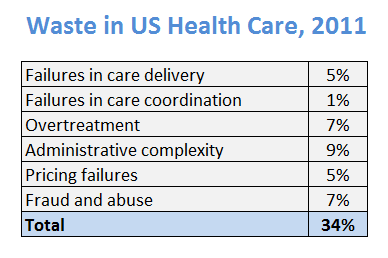 They consider “failures in care delivery” to include failures to execute preventive services or safety best practices, resulting in avoidable adverse events that require expensive remediation.  By “failures of care coordination,” they mean care that is fragmented, such as poorly planned transitions of care, resulting in avoidable hospital readmissions.  They categorize as “overtreatment” care ordered by providers that ignored scientific evidence, were motivated to increase income or to avoid medical malpractice liability, or out of convenience or habit.  They considered “administrative complexity” to be spending resulting from “inefficient or flawed rules” of insurance companies, government agencies or accreditation organizations.  They estimated the magnitude of administrative complexity by comparing administrative expense in the US to that in Canada’s single payer system.  They considered “pricing failures” to be prices that are greater than those which are justified by cost of production plus a “reasonable profit,” presumably due to the absence of price transparency or market competition.  Finally, they considered “fraud and abuse” to be the cost of fake medical bills and the additional inspections and regulations to catch such wrongdoing.

These estimates are generally in alignment with other attempts to categorize and assess the magnitude of waste in health care.  But, I think Berwick and Hackbarth’s estimates of “overtreatment” are probably far too low.  That’s because they, like so many other health care leaders, are so reluctant to address the issue of cost-effectiveness.  Obviously, the definition of over-treatment depends on one’s philosophy for determining what treatments are necessary in the first place.  Everyone would agree that a service that does more harm than good for the patient is not necessary.  Most would agree that a service that a competent, informed patient does not want is not necessary.  Some argue that, if there is no evidence that a treatment is effective, it should not be considered necessary, while others argue that even unproven treatments should be considered necessary if the patients wants it.   Berwick and Hackbarth are ambiguous about their application of this last category.

But, the big disagreement occurs when evaluating treatments for which there is evidence that the treatment offers some benefit, but the magnitude of the benefit is small in relation to the cost of the treatment.  This is a question about cost-effectiveness.  It is at the heart of medical economics.  In my experience, most health care leaders and an even higher proportion of political leaders choose to deny the principles of medical economics and the concept of cost-effectiveness.  They describe attempts to apply those principles as “rationing” — a term which has taken on a sinister, greedy meaning, rather than connoting the sincere application of rational thought to the allocation of limited resources.   Berwick and Hackbarth implicitly take that view.  They are unwilling to define over-treatment based on cost-ineffectiveness.

The analysis I want to see

For years, I’ve been looking for an analysis that attempted to estimate the magnitude of waste from over-treatment based on the principles of health economics.  The diagram below illustrates the hypothetical results of the type of analysis I’d like to see.

In this diagram, the horizontal axis represents the total cost of health care to a population.  I don’t want to see the entire US health care system.  What is more relevant is the population served by an Accountable Care Organization or an HMO.  To create such a diagram, we would first need to break down health care cost into a large number of specific treatment scenarios.  Each of these scenarios would specify a particular treatment (or diagnostic test) with enough clinical context to permit an assessment of the likely health and economic outcomes.  For each scenario, each of the possible health outcomes would be assigned a probability, a duration, and a quality of life factor.  My multiplying the duration by the quality of life factor, we could calculate the “quality-adjusted life years” (or “QALY”) for the outcome.  Then, by taking the probability-weighted average of all the possible health states for the scenario, and then dividing the result by the cost, we could calculate the “cost-effectiveness ratio” for the scenario, measured in “$/QALY.”   Then, we would sort all the treatment scenarios by the cost-effectiveness ratios, with the treatment scenarios with the most favorable health economic characteristics on the left.

Some of the scenarios will generate net savings, such as for certain preventive services where the cost of the avoided disease is greater than the initial cost of the preventive service.  These are clearly cost-effective.  On the other end of the spectrum are scenarios that offer net harm to the patient, such as when adverse side-effects are worse than the benefits of the treatment.  These are clearly cost-ineffective.  In the middle of these extremes are scenarios where there is a positive net benefit to the patient and a positive net cost borne by the population.

Variations on this theme have been used throughout the world for decades by various practice guidelines developers, healthcare policy analysts, health services researchers and health economists.  It is complex and time-consuming.  As I’ve discussed before, it is also controversial in the United States.

Right now, in the US, we all recognize that health care costs are too high.  We’re all focusing on merging providers into larger organizations, installing computer software, and exploring new reimbursement arrangements to address the problem.  But, I’m convinced that over-treatment with cost-ineffective services is a major source of waste.  We will inevitably get back to the core issue of having to figure out which treatment scenarios are wasteful.  We will inevitably have to overcome our denial of health economics and our irrational fear of rational allocation.