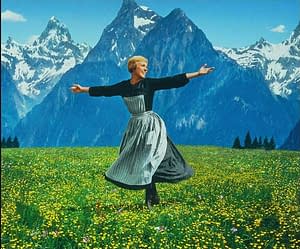 This week, I accompanied my daughter and her elementary school classmates on a field trip to see the musical “The Sound of Music.”  To my daughter, it was a story about good vs. bad parenting.  But the context is 1930’s Austria, just as the Nazi regime is taking over.  The story illustrates how the battle for control, at least initially, takes place among business colleagues, neighbors, friends and even among family members.  And, it reminds us that, no matter how secure we seem to be in our personal lives and no matter how stable our society seems to be, our fortunes can quickly change.  We live in beautiful mountains, and those mountains have cliffs.

When I got home from the musical, I read the news reports regarding fresh evidence that the federal government may be engaged in electronic surveillance of the phone and internet communications of millions of people.  The new reports sparked a resurgence of the longstanding debate about whether such surveillance is a good thing because it might detect terrorist plots in time to disrupt them, or a bad thing, because it infringes our privacy rights and erodes the foundations of our liberty.  That’s a great debate for us to have.  That debate is oddly refreshing because it does not fall cleanly along  party lines. 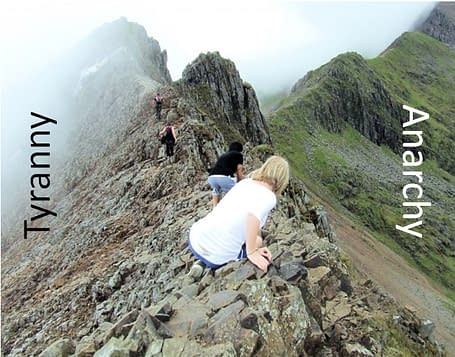 In my opinion, it is a balancing act.  As amateur mountaineers, we hike along a treacherous ridgeline, with cliffs on both sides and slippery rocks underfoot.  On one side is the cliff of anarchy, where lawless invaders, terrorists and criminal gangs roam freely, pillaging our villages and murdering our children.  On the other side is the cliff of tyranny, where the checks and balances in our government break down, leaders get too powerful, levy heavy taxes, imprison or kill dissenters, and generally tell everyone what to do.  As I’ve noted before, most important things involve balancing between undesirable extremes. We must be vigilant to avoid falling over either side.

However, it is useful to note that the risk is not symmetrical.  The steepness of the cliff on the side of anarchy makes it look more frightening.  But the loose gravel on the side of tyranny makes that the more slippery slope.  Over the course of history, its seems as if oppressive leadership has been a far more common state than lawlessness.  So, my advice is to pay a little extra attention to avoiding missteps that erode checks, balances or rights.

How does this relate to health care?

First, our healthy debate about the privacy and accessibility of health care data is analogous.  One the one side, we want to defend the right of patients to control who has access to their own confidential medical records and for which purposes they are used.  On the other side, we want everyone who cares for us to have access to the information they need to enable them to make good decisions about our care, without missing any needed services or subjecting us to the risks of duplicative services.  Furthermore, our ability to assure the safety and effectiveness of health care processes, to hold health care providers accountable, and to learn what works and what doesn’t work requires access to data for populations of patients. We can error in either direction.  But, as with the ridgeline hikers, the dangers are not symmetrical.  In my experience, there are far more people harmed by medical errors caused by lack of access to information and by ineffective care processes than are harmed by inappropriate disclosures of their confidential health information.  So, we need to worry in both directions, but pay a little extra attention to avoiding missteps that erode our clinical decision support and our improvement efforts.

Second, our discussion of “big data” is analogous.  In both terrorist surveillance and health care, there is widespread faith in the value of large quantities of data, without regard to the quality and completeness of that data.  In an opinion piece published on June 7, 2013 on the CNN web site, Shane Harris, the author of “The Watchers: The Rise of America’s Surveillance State,” challenges the evidence that surveillance data mining reduces terrorist events and saves lives. He asserts:

“To date, there have been practically no examples of a terrorist plot being pre-emptively thwarted by data mining these huge electronic caches. (Rep. Mike Rogers, chairman of the House Intelligence Committee, has said that the metadatabase has helped thwart a terrorist attack “in the last few years,” but the details have not been disclosed.)

When I was writing my book, “The Watchers,” about the rise of these big surveillance systems, I met analyst after analyst who said that data mining tends to produce big, unwieldy masses of potential bad actors and threats, but rarely does it produce a solid lead on a terrorist plot.

Those leads tend to come from more pedestrian investigative techniques, such as interviews and interrogations of detainees, or follow-ups on lists of phone numbers or e-mail addresses found in terrorists’ laptops. That shoe-leather detective work is how the United States has tracked down so many terrorists. In fact, it’s exactly how we found Osama bin Laden.”

This quote reminded me of our debates about “big data.”  As I’ve noted before, vendors of big data technologies sometimes over-sell.  They assert that the technology can overcome inadequacies in the structure, quality and completeness of source data.  They imply that the value of data is primarily a function of the size of the database.  Big data sources and technologies are undeniably valuable for some purposes, and will be an important part of our future in health care analytics.  But, as with terrorist surveillance, the real value tends to come from more pedestrian “shoe-leather” investigative techniques.

PrevPreviousIn the dust-up about “rebooting” the EHR meaningful use incentive program, “the Emperor has no clothes” has been the most interesting response.
NextCriticism of ProPublica’s Surgical Scorecard fails to consider the possibility of real, useful analytics.Next