If repealing Obamacare is off the table, can we turn attention to improving it through cost-effective clinical protocols?

Paul Krugman recently wrote an article in the New York Times posing the question: if repealing Obamacare is off the table (for now), should people on the “progressive” end of the political spectrum push for a single-payer “Medicare for all” system or just advocate for incremental improvements to the privatized Obamacare model?  He says if we were starting with a blank slate, he would favor the single payer model.  But, he argues, the politics of moving to single payer are too difficult, and the evidence from other countries suggests that a privatized model can achieve comparable outcomes.  Therefore, he argues that progressive politicians should turn their attention to other social policy priorities like subsidized child care and pre-kindergarten education.

I generally agree with Krugman’s proposal to focus on incremental improvements to Obamacare, particularly if the objective is just to maintain and improve access to health insurance.  But that’s not our only objective.  We should also care about the quality and cost of health care. 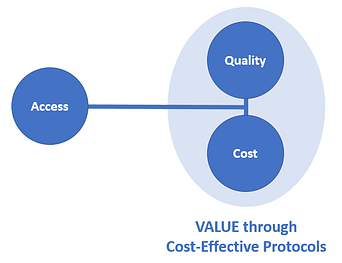 I’ve long felt that policy to increase access to care should be linked to policy to assure the cost-effectiveness and value of care. Insurance is, by its nature, a collective, cooperative thing. In the long run, the people who are covered under the same insurance risk pool are sharing a finite resource. If they understood that, they would rationally desire for there to be protections against the pooled resource being squandered by other people for low value purposes. In health insurance, such protections primarily take the form of benefit policies. Benefit policies may define which services are not covered because they are considered experimental or cosmetic. They may define limitations based on age, gender, or medical history. They may also set quantity limits on coverage, such as defining the number of physical therapy visits or inpatient psychiatric hospital days covered. They may set lifetime maximum dollar amounts. But, such insurance benefit policies are very blunt instruments.  Insurance companies also protect against low-value uses of health care services using “utilization management” programs, including requiring pre-authorization processes, where doctors are required to submit justifications for proposed services and insurance company employees judge whether the proposed services meet “appropriateness” criteria.  Such utilization management programs create conflict, and insurance companies generally establish criteria that are very loose to minimize the conflict.  As a result, such programs are also very blunt instruments.

Clinical protocols, in contrast, can be more precise instruments, taking into consideration the details of a patient’s clinical situation. Clinical protocols are typically developed by physicians, and are ideally supported by evidence from clinical research studies.  Clinical protocols can take many different forms, and go by different names including “guidelines,” “algorithms,” “care maps,” and “standards of care.”  Whenever we have tried to design clinical protocols, especially for complex and costly care processes such as for low back pain, congestive heart failure, cancer or the care of frail elderly patients, we discovered that different protocols can have very different costs and outcomes.  Thoughtful design, rigorous implementation and continual evaluation and improvement of clinical protocols can lead to large improvements of outcomes and large reductions in cost. But, cost effective protocols do deny some people some treatments that would have helped them a little (just not enough to be “worth” the cost). The whole premise of designing cost-effective protocols depends on the recognition and acceptance of the collective nature of insurance and the finite nature of the resources being shared. Furthermore, it is essential that the people for whom such protocols are applied trust the people and the process of creating and implementing the protocols. In for-profit, commercial insurance companies, there is a fundamental conflict of interest if the owners of the insurance company get to control the design and implementation of the protocols and if they get to keep the money saved from denying services that could have helped people — even a little.

In a single payer system, the entire country (or each state) is treated as a risk pool, and the government plays the role of protocol developer. Some people are OK with that, while others are loathe to assign such authority to governments.  If  we continue to have private insurance companies or accountable care organizations bearing the risk for populations of patients (as in the current Obamacare system), then such organizations can make decisions about clinical protocols.  In either case, we absolutely need to create structures and mechanisms to ensure that the people receiving the care trust the people and process used to create and implement cost-effective protocols.  Some private organizations, such as Group Health Cooperative of Puget Sound (now part of Kaiser Permanente), created some structures and processes designed to build this trust back in the 1990s.

Although most other advanced countries already accept cost-effectiveness and pursue the development and implementation of cost-effective protocols, and although there would be a huge opportunity to reduce cost and improve outcomes by doing so in the U.S., making this policy shift in the U.S. will be very difficult. The U.S. population has been taught to be wary of “rationing” and “death panels” and U.S. doctors have been taught to reject “cookbook medicine.” Nevertheless, moving the health policy discussion in that direction may, in the long term, do some good.   Politicians asking “what’s next” after the apparent end of the quest to repeal Obamacare should consider turning attention to bringing cost-effectiveness to health care through clinical protocols.

PrevPreviousHospital Value-based Purchasing program 1% incentive is like homeopathic medicine — too diluted to actually work
NextEMR event log study shows 6 hrs of use per day, but implicitly belittles the clinician’s cognitive effort and the EMR’s supportNext